Begin typing your search above and press return to search. Press Esc to cancel.

So you designed a product, tested the market, met a demand and perfected a prototype through multiple revs. Congratulations, you’re ready to take the next step!

When you’re the independent designer sorting your prototype parts searches by “cut tape” and “bulk”, your focus might have narrowed past seeing the big picture. Did you plan for the quantity of part purchasing you’ll need to make your production run? What about the second run? Just like op-amp feedback, what you get out of your production run, has an impact on what goes into it.

The first step to engineering production capability into your design is correctly identifying which parts are critical. This requires you to give up some control, which can be daunting for an engineer. The fact of the matter is, all the parts on your board are not precious little snowflakes. In my schematic capture tool, I’ve created a set of custom fields that I fill in for every component, and one of them is “Critical”. As I enter the properties for each component that field gets filled with a “Y” or a “N”. But what criteria do you use to determine if that part is truly, I mean really, critical? Here are three questions to ask yourself, that will get you thinking about your design with criticality in mind:

Once you’ve identified the most important parts on your board, you can start to plan for how life will look during production. So export your BOM, sort it by critical components and let’s record some values.

Let’s be frank: designers are not normally flooded with cash for buying components up front. And as we discussed in the post about working with purchasing departments, the cost of even a single commodity component can quickly get out of hand.

What’s worse, if you miss the window of a part being a particular price, that cost increase will result in lost profit. When it’s time for the second production run, you not only are buying more expensive parts, but have less money to do so. It’s a horrible sinking feeling to have taken all the steps to cross the i’s and dot the t’s then watch money just disappear at part purchasing time because cost went up overnight. Part pricing can feel as arbitrary as buying airline tickets! Just like buying flights, having a firm grasp on historical pricing information is how to combat the problem.

Take each of the parts you’ve identified as critical, and assess how much the price has changed over time. Parts.io actually tracks that for nearly every component, so you can go to the part page and see the price volatility over a 12 month period. If you wanted to go crazy, you could calculate the standard deviation for each critical component over the 52 weeks listed, which would be effective, but tedious (and since we’re independent designers, you and I, we don’t have interns to hand tedious tasks to). It’s easier, though, to grab the highest price and the lowest price for that component, and record that in the spreadsheet right next to the quantity level price of the component. Do just a teeny bit of math and divide the lowest price by the highest price to figure out the percentage of price change over the past year. Obviously prior history is no guarantee of future results, but at least you can see what your life would have been like if you’d gone to production a year ago. Take that percentage change into account for your budgeting. That way you won’t be wondering how to cut a check in four months when your 0.001 tolerance capacitor with the Unicorn Blood dialectric jumped in price by 30%. You have no influence over that cost jump, but you can be prepared for it.

If you look at the LM317 as an example, the price over time chart for the Fairchild Semiconductor LM317T has been jumping around from 0.83 to 0.75 for the last year, while the ST Micro LM317 has been steady at 1.55 during the same period. 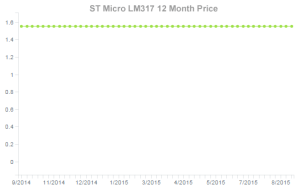 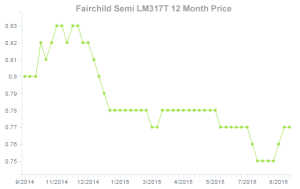 The amount of parts you’ll need for a production run is equal to the quantity per board times the production volume plus the excess required by your Contract Manufacturer (CM), usually specified as a percentage. Go back to your spreadsheet and make that calculation. Now go back to Parts.io and look at two things: current stock levels at your preferred distributors, and distributor inventory levels over the last 12 months. If the current amount in inventory is below your needs, it’s pretty clear you’ve got a problem. Likewise, if at any point the quantity available in the supply chain was insufficient to allow production part purchasing to go forward, red flags should be waving.

It doesn’t matter how flush you are with cash, you cannot buy parts that don’t exist. If it looks like this could be a potential problem, there are two things you can do to try to mitigate the risk.

First, buy early and buy often: secure your production needs well ahead of time, even if that means storing a few reels of precision resistors in a cabinet for a few weeks. You should have budgeted for the cost of your parts well ahead of time. Hopefully the tradeoff of supply chain security is worth the cash flow impact. You can also check with your CM to see if they will store the parts on site for you. When you start to commit to more than a single production run at a time, storing critical parts at your CM will be come a crucial need. If you know you’ll need 500 widgets for a single run, and you can get a reel of 2000 at a significant cost savings, it makes sense to buy the whole reel, send it to your CM, pockets the savings, and know they’ve got enough on hand for the next three runs + CM requested excess.

Second, try to identify a direct replacement for your component. Even for many of the high precision components, multiple manufacturers produce Form / Fit / Function (FFF) equivalents. You can already see that this might lead to design nightmares, as you start to see slight differences from one manufacturer to the other. There is a reason why “Form” and “Fit” are the first two F’s in FFF. If the footprint size and the pin outs don’t match, then there’s no point considering it. You’ll most likely need to make compromises on the technical specifications, but they tend not to be too drastic… maybe a milliamp here ore there due to different manufacturing processes resulting in different characteristics. Sometimes the hard part is simply figuring out the apples-to-apples comparisons between two manufacturers datasheets!

When parts.io believes there is a direct FFF correlation between parts, it will list them on the product page for you to examine. This is an example of the FFF equivalents suggested for the SN74LV14APWRG4 Schmitt Trigger Inverter I listed above as a critical item in my BOM.

When you do decide on an FFF equivalent, make sure to note that on your spreadsheet. If your CM is going to do the parts sourcing for you, let them know ahead of time that you approve of that as a direct replacement, and you’ll both be happier down the road.

In part 2, we’ll talk about managing factory lead time from the component manufacturers.